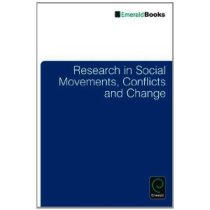 The latest issue of „Research in Social Movements, Conflict and Change“ deals with the visual analysis of social movements.

Together with Priska Daphi and Anja Lê I wrote a piece about „Images of Surveillance: The Contested and Embedded Visual Language of Anti-Surveillance Protests“.

Abstract: This chapter provides an analysis of images produced and employed in protests against surveillance in Germany in 2008 and 2009. For this purpose, a method of visual analysis is developed that draws mainly on semiotics and art history. Following this method, the contribution examines a selection of images (pictures and graphic design) from the anti-surveillance protests in three steps: description of components, detection of conventional signs, and contextual analysis. Furthermore, the analysis compares the images of the two major currents of the protest (liberal and radical left) in order to elucidate the context in which images are created and used. The analysis shows that images do not merely illustrate existing political messages but contribute to movements’ systems of meaning creation and transportation. The two currents in the protests communicate their point of view through the images both strategically and expressively. The images play a crucial role in formulating groups’ different strategies as well as worldviews and identities. In addition, the analysis shows that the meaning of images is contested and contextual. Images are produced and received in specific national as well as issue contexts. Future research should address the issue of context and reception in greater depth in order to further explore the effects of visual language on mobilization. Overall, the contribution demonstrates that systematic visual analysis allows our understanding of social movements’ aims, strategy, and collective identity to be deepened. In addition, visual analysis may provide activists with a tool to critically assess their visual communication.